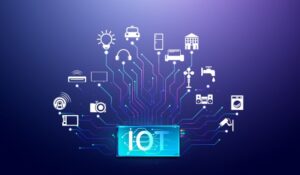 2. LIGHTING AUTOMATION – Complete control of your office automation lighting from brightness to color from your IoT office control panel. Lighting automation lets you regulate lighting options in your office remotely and conveniently.

3. OUTDOOR LIGHTING – Dim and control building lighting from your IoT device, or program the lights to turn off automatically at a designated time. If you are using a smart door sensor, you can activate the walkway lights when the office door opens or when motion is detected.

4. DOORBELL – See and talk to delivery drivers or other visitors at your loading dock or main entrance – even if you’re not at the office.

5. LOCKS & SECURITY – Let smart office locks control access to your business. Locks office automation enables you to control your locks via IoT devices. Never lose another physical key or worry about whether you locked your business doors or not.

6. CLIMATE CONTROL – Use your thermostat in your office automation control system and control temperature from a tablet or computer anywhere you are. Program your office’s thermostats for the nights and weekends, so you’re not air-conditioning or heating empty rooms.

7. MOTION SENSORS – Wireless motion detectors for notification. Program your lights to turn on and off when people enter and leave and have the system alert you when someone’s entered your office.

8. WINDOW SHADES – Reduce energy costs by programming your shades to move with the sun. This gives you great energy savings for heating and cooling along with ambient lighting.

9. WATER LEAK ALARM – Check for water in your office and get notified of leaks and floods when you are not in the office. Water leak alarms are designed to help mitigate damage and avoid leak conditions so that they can be fixed before they become much costlier problems. These flood alerts can be crucial, and they make this sensor one of the most popular for office automation alerts.

10. PRESSURE-SENSITIVE MATS – Pressure-sensitive mats alert you to comings and goings of visitors, employees, and intruders. These wireless monitors send alerts to you when someone steps on the mat. Most are suitable for indoor or outdoor use.

11. CONFERENCE ROOM RESERVATIONS – Smart-office automate a conference room reservation. As soon as you walk into a meeting room, RFID software recognizes you and books the room on the spot.

12. HUBS & CONTROLLERS – Office automation has enabled central control devices from which you control all your automation mechanisms. Arduino Tron IoT Tiles is affordable office automation options for you, customized this hub controller for your office needs.

This very small and inexpensive Arduino Tron IoT Display uses an SSD1306 OLED backlight display module and ESP-01. The IoT Display ESP-01 module is a receiver which connects via the WiFi network to accept IoT data and display the alerts and messages to you instantly. The Arduino Tron IoT Display is a single point to display meaningful alerts for you from IoT devices. This helps you know what is going on with your IoT network and devices.

It is much clearer for you to read the IoT Display alert message than for you to fumble for your cell phone to read an alert notification that may disappear. The Arduino Tron IoT Display is a notification module that can also provide information when installed into your equipment or a professional desk interface for your IoT devices.

As distributed IoT sensors and applications become larger and more complex, the simple processing of raw sensor and actuation data streams becomes impractical. Instead, data streams must be fused into tangible facts, information that is combined with knowledge to perform meaningful operations.

Situational Awareness (SA) is the perception of environmental elements by our IoT devices and events with respect to time or space, the comprehension of their meaning, and the projection of their status after some variable has changed, such as time, or some other variable, such as a predetermined event.