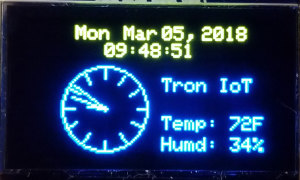 This very small and inexpensive Arduino Tron IoT Display uses an SSD1306 OLED backlight display module and ESP-01. The IoT Display ESP-01 module is a receiver which connects via the WiFi network to accept IoT data and display the alerts and messages to you instantly. The Arduino Tron IoT Display is a single point to display meaningful alerts for you from IoT devices. This helps you know what is going on with your IoT network and devices.

It is much clearer for you to read the IoT Display alert message than for you to fumble for your cell phone to read an alert notification that may disappear. The Arduino Tron IoT Display is a notification module that can also provide information when installed into your equipment or a professional desk interface for your IoT devices.

As distributed IoT sensors and applications become larger and more complex, the simple processing of raw sensor and actuation data streams becomes impractical. Instead, data streams must be fused into tangible facts, information that is combined with knowledge to perform meaningful operations.

Situational Awareness (SA) is the perception of environmental elements by our IoT devices and events with respect to time or space, the comprehension of their meaning, and the projection of their status after some variable has changed, such as time, or some other variable, such as a predetermined event.